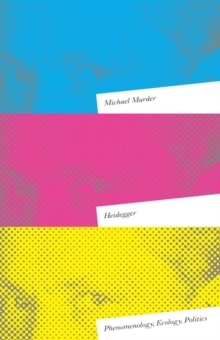 By: Marder, Michael (University of the Basque Country, Vitoria-Gasteiz, Spain)

Understanding the political and ecological implications of Heidegger's work without ignoring his noxious public engagements The most controversial philosopher of the twentieth century, Martin Heidegger has influenced generations of intellectuals even as his involvement with Nazism and blatant anti-Semitism, made even clearer after the publication of his Black Notebooks, have recently prompted some to discard his contributions entirely.

For Michael Marder, Heidegger's thought remains critical for interpretations of contemporary politics and our relation to the natural environment. Bringing together and reframing more than a decade of Marder's work on Heidegger, this volume questions the wholesale rejection of Heidegger, arguing that dismissive readings of his project overlook the fact that it is impossible to grasp without appreciating his lifelong commitment to phenomenology and that Heidegger's anti-Semitism is an aberration in his still-relevant ecological and political thought, rather than a defining characteristic.

Through close readings of Heidegger's books and seminars, along with writings by other key phenomenologists and political philosophers, Marder contends that neither Heidegger's politics nor his reflections on ecology should be considered in isolation from his phenomenology.

By demonstrating the codetermination of his phenomenological, ecological, and political thinking, Marder accounts for Heidegger's failures without either justifying them or suggesting that they invalidate his philosophical endeavor as a whole.