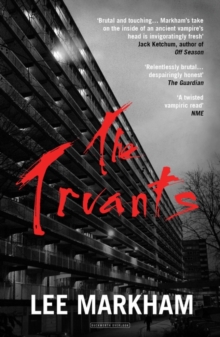 In a fresh twist on the traditional vampire narrative, The Truants is a startling, noirish tale of immortality, bloodlust and rage.

Following his lover's suicide, the last of the `old-ones'- ancient immortal beings as clever as they are ruthless, and unable to withstand the light of the sun - has had enough of this world gone to ruin and decides to end his existence.

Yet as he waits for the burning dawn on a bench near a council estate, he is held up at knifepoint by a youth and stabbed.

While the old-one's body turns to ash as the sun rises, his assailant scurries back into the estate's feral underbelly with the knife in his pocket.

The old-one's blood is still seared into its sharpened blade, and as the knife does its menacing rounds his consciousness is awakened in the city's children from the depths of the afterlife.

Determined to die, he must find and destroy the knife to regain control of his soul.

But someone is out to stop him... A sharp and powerful new voice, Lee Markham has written an intelligent, visceral novel which uncovers the fragility and hopelessness of Britain's social underclass - and the horror of their everyday lives.