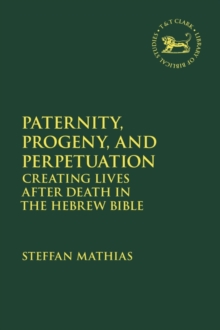 Paternity, Progeny, and Perpetuation : Creating Lives after Death in the Hebrew Bible

This book offers a fresh perspective on the importance of progeny and perpetuation of the family line in the Hebrew tradition.

Steffan Matthias argues that the Hebrew bible depicts failing to protect the transmission of the family line as both a failure in the social order, a threat to the afterlife, and a failure in masculinity, leading to the eradication of the name and memory of the man and the destruction of the household.

Using the work of Pierre Bourdieu, as well as anthropological and gender-critical insights, Matthias reassess pertinent texts which respond to the threat of men dying without children, such as levirate marriage (Deut 22:5-10) or the erection of monuments (Isa 56:5-8). Themes such as death, burial and memorial, identity, covenant, name, genealogy, property, seed and sexuality, rather than being treated as separate parts of social or family life, are critically assessed in light of each other.

Matthias instead illustrates how they form part of the same discourse of social reproduction, in which the integrity of the family is protected and passed down from father to son in generations of descendants.

Paternity, Progeny, and Perpetuation raises profound questions regarding the subtle ways texts that respond to this threat of social annihilation - the destruction of the father and his line - reinforce social boundaries and construct men as transmitters of identity and women as submissive counterparts.