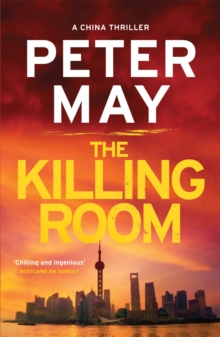 Part of the China Thrillers series

PETER MAY: OVER 3 MILLION COPIES SOLDFROM THE AUTHOR OF COFFIN ROAD, ENTRY ISLAND AND I'LL KEEP YOU SAFE'CHILLING AND INGENIOUS' SCOTLAND ON SUNDAY'THE PLOT TWISTS AND TURNS LIKE THE TAIL OF A CHINESE DRAGON' SHOTS MAGAZINEIn the third of the critically acclaimed China thrillers, Li Yan and Margaret Campbell travel to Shanghai: where a new ally, and a new enemy, await. THE NEW CASEWhen a mass grave containing eighteen mutilated female corpses is discovered in Shanghai, detective Li Yan is sent from Beijing to establish if the bodies are linked to an unsolved murder in the capital.

THE NEW COLLEAGUEMei Ling is a formidable woman: a fact that is not lost on Li's on-off lover, forensic pathologist Margaret Campbell.

But when Campbell, vulnerable and still grieving the loss of her father, learns that the victims were subjected to 'live' autopsies, she knows the case is bigger than her pride. THE KILLING ROOMLi, Campbell and Mei Ling are now entering the arena of a sickening nemesis, and opening a door behind which lies each of their very worst nightmares. LOVED THE KILLING ROOM? Read the next book in the China series, SNAKEHEADLOVE PETER MAY? Order his new thriller, A SILENT DEATH