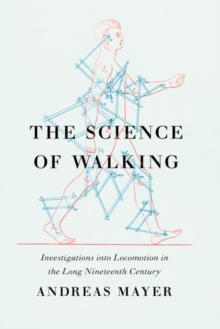 The Science of Walking : Investigations Into Locomotion in the Long Nineteenth Century

The Science of Walking recounts the story of the growing interest and investment of Western scholars, physicians, and writers in the scientific study of an activity that seems utterly trivial in its everyday performance yet essential to our human nature: walking.

Most people see walking as a natural and unremarkable activity of daily life, yet the mechanism has long puzzled scientists and doctors, who considered it an elusive, recalcitrant, and even mysterious act.

In The Science of Walking, Andreas Mayer provides a history of investigations of the human gait that emerged at the intersection of a variety of disciplines, including physiology, neurology, orthopedic surgery, anthropology, and psychiatry. Looking back at more than a century of locomotion research, Mayer charts, for the first time, the rise of scientific endeavors to control and codify locomotion and analyzes their social, political, and aesthetic ramifications throughout the long nineteenth century.

In an engaging narrative that weaves together science and history, Mayer sets the work of the most important representatives of the physiology of locomotion--including Wilhelm and Eduard Weber and Etienne-Jules Marey--in their proper medical, political, and artistic contexts.

In tracing the effects of locomotion studies across other cultural domains, Mayer reframes the history of the science of walking and gives us a deeper understanding of human movement.