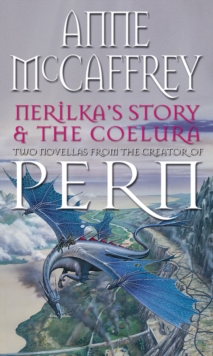 Part of the The Dragon Books series

Nerilka's StoryIt was in Moreta's time -- a time of legend, of heroic valor, of terrible Threadfall and the Great Plague that devastated both Holders and Dragonfolk.

For Lady Nerilka of Fort Hold, the tragedy was twofold, for with the death of her mother and her sister, her father's mistress took possession of the Hold.

Angry and betrayed, Nerilka decided to escape and, as Pern seethed in turmoil, she began her perilous journey to Ruatha, Lord Alessan and an unknown destiny. A gripping tale in Anne McCaffrey's world-famous Chronicles of Pern. The CoeluraWhen the Lady Caissa was told by her exalted sire to enter into an heir-contract with Cavernus Gustin she was appalled.

For although Gustin was genetically sound he was vain, pompous and intellectually inept.

But Caissa's father was determined there should be a union -- he had his own privately plotted plans for such a match. And a few hours later Caissa began to suspect what they were.

On a private flight over the forbidden areas of the North, she was alerted by a distress signal -- and there discovered a stranger who said his name was Murell -- a man surrounded by coelura, the incredible rainbow creatures whose very brilliance threatened their extinction.

It was the coelura her father wanted. And Murell was determined to save them.