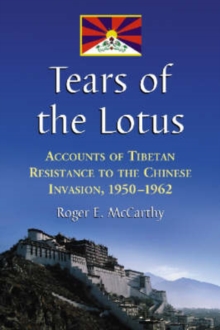 Tears of the Lotus : Accounts of Tibetan Resistance to the Chinese Invasion, 1950-1962

In 1949, Mao Tse-tung first sent his People's Liberation Army into the eastern Tibetan province of Amdo; he followed with an invasion of the province of Kham in 1950.

Ill-prepared, disorganized and badly outnumbered, the small Tibetan armed forces were no match for the invaders.

At first the Chinese persuaded many Tibetans that their intent was merely to help them share in the future greatness and wealth that Mao had promised all.

In a short time the Tibetan tribesmen realized, however, that the true purpose of the invasion was otherwise.

Their religion and their freedom were at stake. Despite the repeated efforts by the Dalai Lama and others in Lhasa to dissuade them, the people resisted the Chinese - at great cost: over one million dead in the 1950s.