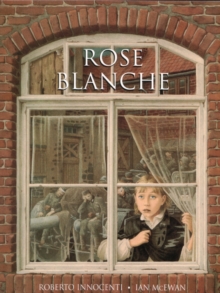 By: McEwan, Ian,  Innocenti, Roberto(Illustrated by)

Rose Blanche was the name of a group of young German citizens who, at their peril, protested against the war.

Like them, Rose observes all the changes going on around her which others choose to ignore.

She watches as the streets of her small German town fill with soldiers.

One day she sees a little boy escaping from the back of a truck, only to be captured by the mayor and shoved back into it.

Rose follows the truck to a desolate place out of town, where she discovers many other children, staring hungrily from behind an electric barbed wire fence. She starts bringing the children food, instinctively sensing the need for secrecy, even with her mother.

Until the tide of the war turns and soldiers in different uniforms stream in from the East, and Rose and the imprisoned children disappear for ever ...