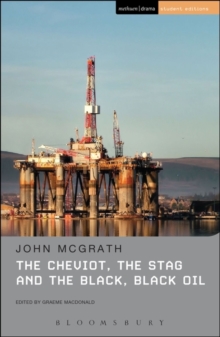 The cheviot, the stag and the black, black oil

Written during the 1970s, John McGrath's winding, furious, innovative play tracks the economic history and exploitation of the Scottish Highlands from the post-Rebellion suppression of the clans to the story of the Clearances: in the nineteenth century, aristocratic landowners discovered the profitability of sheep farming, and forced a mass emigration of rural Highlanders, burning their houses in order to make way for the Cheviot sheep.

The play follows the thread of capitalist and repressive exploitation through the estates of the stag-hunting landed gentry, to the 1970s rush for profit in the name of North Sea Oil.

Described by the playwright as having a "ceilidh" format, The Cheviot, the Stag and the Black, Black Oil draws on historical research alongside Gaelic song and the Scots' love of variety and popular entertainment to tell this epic story. A totally distinctive cultural and theatrical phenomenon, the play championed several new approaches to theatre, raising its profile as a means of political intervention; proposing a collective, democratic, collaborative approach to creating theatre; offering a language of performance accessible to working-class people; producing theatre in non-purpose-built theatre spaces; breaking down the barrier between audience and performers through interaction; and taking theatre to people who otherwise would not access it.

The play received its premiere in 1973 by the agit-prop theatre group 7:84, of which John McGrath was founder and Artistic Director, and toured Scotland to great critical and audience acclaim.