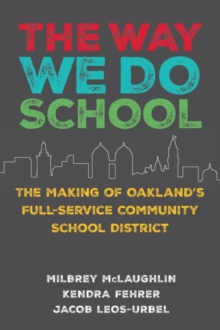 The Way We Do School : The Making of Oakland's Full-Service Community School District

The Way We Do School: The Making of Oakland's Full-Service Community School District offers an in-depth profile of the nation's most ambitious community school initiative.

The book focuses on a nearly ten-year effort to transform all eighty-six district schools in Oakland, California into community schools in order to better meet the academic and personal needs of all students. Based on six years of research, the authors detail the implementation of the effort at both the district and school levels, including the detailed, community-wide planning process, the policy 'levers' for system change as well as the organizational shifts and other tools that were employed. Under extraordinarily difficult conditions, Oakland's Community Schools, Thriving Students initiative spurred system change at both central office and school levels.

Though still a work-in-progress, the initiative's 'whole-child approach' has resulted in positive outcomes for students and for the district.

In addition, several elements of Oakland's full-service community schools (FSCS) work have been recognized nationally including the African American Male Achievement program, its district partnership model, and its restorative justice and social-emotional learning practices. The Way We Do School illustrates how the implementation of Oakland's full-service community school initiative and its remarkable stability over time provide many lessons for the community school field and most especially for policy makers and practitioners interested in launching a district-led FSCS system.