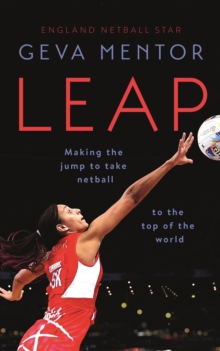 Leap : making the jump to take netball to the top of the world

An inspiring memoir by England netball star and Commonwealth Games gold medallist Geva Mentor. **Includes an exclusive 15% discount code for Gilbert Netball**Geva Mentor is the best netballer in the world.

In her honest, open and inspiring autobiography, Leap, she sheds light on her journey to the top. As a child Geva was a naturally gifted athlete, standing out at 5'10" at the age of twelve.

She began life as a champion trampolinist, but when she outgrew the sport, literally, she found she had to try something new.

This led her to basketball, but the boys on the other teams complained - she was just too good.

Making up the numbers for an impromptu netball match one day at the age of thirteen she found her home in netball - or rather it found her. From here, Geva's rise amongst the ranks of British netball was stratospheric, she was playing for the England senior team when she was just fifteen years old. Taking risks and forging the way for other athletes Geva moved to Australia to develop her game by playing in the best league in the world and eventually winning Commonwealth gold with the England Roses.

However, it's not all been easy, both on and off the court, and Geva talks honestly about her personal life, and how the difficulties and failures of her teams, both international and domestic, have driven her on to achieve the highest possible success in the sport.