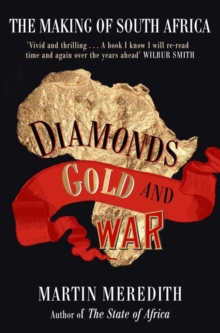 Diamonds, gold and war : the making of South Africa

The prize was great -- not just land, but the riches it held, in the form of diamonds and gold.

Martin Meredith's follow-up to his magisterial The State of Africais an equally epic new history of the making of South Africa.

Covering the extraordinarily eventful four decades leading up to the establishment of the Union of South Africa in 1910, it covers some of the most iconic tales of imperial history.

The Zulus at Rorke's Drift; the Jameson Raid; the diamond and gold rushes at Kimberley and Witwatersrand; the Boer wars; the titanic struggle between the arch-imperialist Cecil Rhodes and his Boer rival, Paul Kruger -- DIAMONDS, GOLD AND WARbrings all of these and more together in a stunningly coherent and compelling narrative.