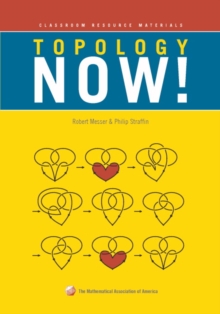 Part of the Mathematical Association of America Textbooks series

Topology is a branch of mathematics packed with intriguing concepts, fascinating geometrical objects, and ingenious methods for studying them.

The authors have written this textbook to make the material accessible to undergraduate students without requiring extensive prerequisites in upper-level mathematics.

The approach is to cultivate the intuitive ideas of continuity, convergence, and connectedness so students can quickly delve into knot theory, the topology of surfaces and three-dimensional manifolds, fixed points and elementary homotopy theory.

The fundamental concepts of point-set topology appear at the end of the book when students can see how this level of abstraction provides a sound logical basis for the geometrical ideas that have come before.

This organization exposes students to the exciting world of topology now(!) rather than later.

Students using this textbook should have some exposure to the geometry of objects in higher-dimensional Euclidean spaces together with an appreciation of precise mathematical definitions and proofs.