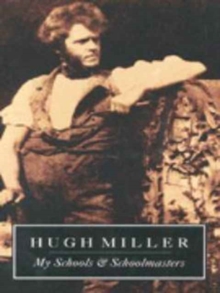 My Schools and Schoolmasters

This memoir is of the schooldays of one of the most extraordinary minds Scotland has produced, Hugh Miller.

Miller rose, if not from absolute poverty, certainly from a modest background, to become both a specialist in the field of geology and a generalist in the wider literary world, covering, as writer and editor, subjects as diverse as poetry, folklore, science, education, religion, history and travel.

In his working life he was a stonemason, banking accountant, journalist, editor, lecturer and defender of Christianity against the evolutionists.

By the time of his tragic suicide in 1856, Miller's prodigious output had made him among the best known of Victorian literary figures, admired by Thomas Carlyle, Charles Dickens and John Ruskin.

By the latter part of the 19th century, his reputation extended across the world - his books were widely translated, and in America, according to the geologist Sir Archibald Geikie, "They were to be found in the remotest log huts of the far west." In 1879, the great environmentalist John Muir named one of the glaciers of Glacier Bay, Alaska, after the Cromarty stonemason.