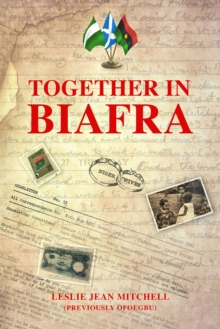 When a country experiences a civil war, media reports are mainly brought to the attention of the outside world by those who can only report on the surface impressions obtained during a short visit or from the comfort of a studio thousands of miles away.

My experiences, living and working at the grass roots level, during and after the crisis in Nigeria in the 1960s has a different perspective.

As a young Scotswoman married to a Nigerian from the breakaway republic of Biafra we lived as refugees with our young family, forced to leave our home seven times in the 30 months of the civil war as the war raged around us.

Cut off from the outside world, in a situation the British High Commissioner in Nigeria had predicted at the onset, would be over in two weeks, we lived a life full of experiences which gave me a `qualification in survival' no university could have imparted.

Without electricity, gas, petrol or phones, and often without money, medicine or safe drinking water we learned to appreciate the basic necessities of life.

I was 18 years old, living in Dunfermline, Scotland when the man I was to marry asked me for a dance at the Kinema Ballroom.

Two years later my career plan to qualify as a nurse was over and I was married to Len Ofoegbu, with a baby daughter and we were on our way to a new and very different life.

Our first home was in the capital, Lagos, and was a big culture shock to Len and I.

The newly independent West African country was already experiencing political and civil unrest, leading to violence, massacres, coups, and the inability of the central government to control the situation.

Hundreds of thousands of Easterners who had settled throughout the whole of the country now `went home' as they had become the targets of slaughtering mobs.

The secession of the Eastern Region, calling itself Biafra, followed and a David and Goliath bitter conflict ensued.

The word `kwashiorkor' and pictures of starving children and adults appeared in the Western press for the first time.

I was one of around a dozen, mainly British, foreign wives of Biafrans who remained with their husband throughout the civil war.

I worked voluntarily with relief agencies in feeding centres, clinics, an orphanage and, after Biafra surrendered in January 1970, in a children's hospital in return for food for my growing family.

In May 1970 we moved back to live in Lagos where we went through more crises as a family.

I became an early member of Nigerwives, an organisation for foreign wives and partners of Nigerians which became like an extended family as we gave mutual support and strove to resolve anomalies in Nigerian laws which put unnecessary restrictions affecting our particular circumstances.

By the 1980s I accepted that my husband and I had grown so far apart that I could no longer remain with him.

My legal reason to remain in Nigeria was `to accompany him' and he could withdraw his immigration responsibility for me at any time.

I needed a security which he could not give me and I left him and Nigeria to begin a new life and career in Britain in 1985.

I was advised when I completed the original manuscript in the 1970s not have it published as Nigeria was extremely sensitive about any account which was sympathetic to the Biafran side of the civil war.

In 1986 a much shorter version of Together in Biafra, titled Blow The Fire, telling the story up to 1970 was printed by Tana Press in Nigeria.

I retain the copyright. It was published under my married name Leslie Jean Ofoegbu.

It has been cited in academic papers. An example is A Lingering Nightmare: Achebe, Ofoegbu and Adichie on Biafra, Francoise Ugochukwu 2011.