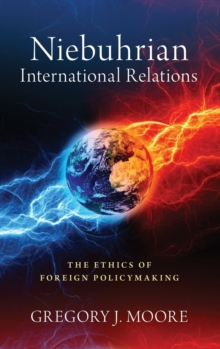 Reinhold Niebuhr's ideas about ethics, social justice, and foreign policy have been hugely influential for American political thought, and this has been true across the political spectrum, from progressive social justice activists to neo-conservatives.

A one-time leader in the Socialist party, Niebuhr worked with Eleanor Roosevelt to found Americans for Democratic Action.

Jimmy Carter took inspiration from his ideas about love and justice, and Barack Obama haspraised him as one of his favorite philosophers.

His theories have also influenced neoconservatives, many of whom cited his work to support the 2003 invasion of Iraq.

Yet, Niebuhr never published a single, comprehensive book on his approach to international relations, and, because he was so prolific, onewould have to sift through volumes of his work to try to construct such a unified vision.

This book distills Niebuhr's disparate and heretofore difficult-to-access work on international relations into one concise and accessible volume.

It then applies his approach to contemporary foreign policy issues such as the 2003 Iraq War, theResponsibility to Protect, and the rise of China.

The book also considers Niebuhr's contribution to IR theory and contextualizes it in the present day revival of classical Realism with a multivariate, existentialist twist.

Ultimately, the book asserts that Niebuhr's notion of a fallible, self-interestedview of human nature, his dialectical approach, and a related moral dualism run throughout his work on politics and international relations as they did through the rest of his work.