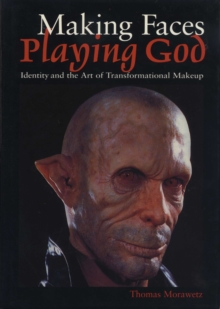 Wearing a mask-putting on another face-embodies a fundamental human fantasy of inhabiting other bodies and experiencing other lives.

In this extensively illustrated book, Thomas Morawetz explores how the creation of transformational makeup for theatre, movies, and television fulfills this fantasy of self-transformation and satisfies the human desire to become "the other."Morawetz begins by discussing the cultural role of fantasies of transformation and what these fantasies reveal about questions of personal identity.

He next turns to professional makeup artists and describes their background, training, careers, and especially the techniques they use to create their art.

Then, with numerous before-during-and-after photos of transformational makeups from popular and little-known shows and movies, ads, and artist's demos and portfolios, he reveals the art and imagination that go into six kinds of mask-making-representing demons, depicting aliens, inventing disguises, transforming actors into different (older, heavier, disfigured) versions of themselves, and creating historical or mythological characters.