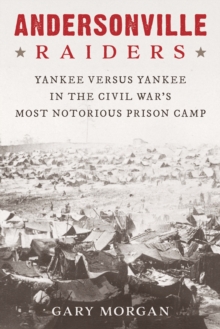 In July 1864, six Union soldiers were hanged at Andersonville, a Civil War prison camp notorious then and now for its harsh conditions.

But the hanged men's crimes had nothing to do with the war against the Confederacy; they weren't spies or saboteurs.

They were the leaders of a gang-known as The Raiders-who terrorized their fellow Union prisoners in the hell of Andersonville.

By June 1864, prisoners had had enough, and camp commandant Henry Wirz (executed after the war) sanctioned the formation of a quasi-police force, the Regulators, with permission to arrest, try, and punish offenders.

In less than two weeks, the Raiders were broken up and arrested and hung. Andersonville is one of the most notorious aspects of the Civil War, and this is one instance in which brother-against-brother chivalry did not prevail, not even amongst inmates from the same side.

Gary Morgan has dug deep into the historical record to tell this story, which is at once dramatic and historically important.