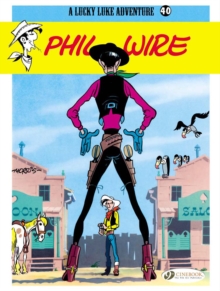 Part of the A Lucky Luke adventure ; 40 series

Getting one past Lucky Luke...A tall order, even for this gunman! In Bottleneck Gulch, there's a saloon where the owner is a crook of the worst order.

When a second saloon opens, our crook isn't happy that someone's selling proper whisky cheaper than his own rotgut.

To get rid of the competition, he calls upon an oversized gunman for hire, Phil Wire.

But the killer runs afoul of Lucky Luke, who decides to take his place in order to clean up the town-only, not the way his employer expected! KEY SELLING POINTS: *Lucky Luke is one of the most famous cartoon characters in the world, alongside Asterix and Tintin.

His adventures have been made into feature films and animated series. *Bestselling European comics series ever, with more than 300 million copies sold worldwide in more than 30 languages*Suitable for adults and children*Published in English for the first time The 40th adventure of Lucky Luke, and the Old West at its funniest!