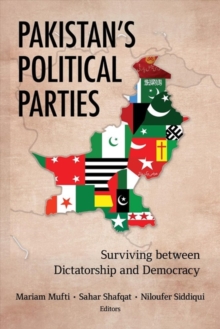 Part of the South Asia in World Affairs Series series

Pakistan's Political Parties examines how the civilian side of the state's current regime has survived the transition to democracy, providing critical insight into the evolution of political parties in Pakistan and their role in developing democracies in general. Pakistan's numerous political parties span the ideological spectrum, as well as represent diverse regional, ethnic, and religious constituencies.

The essays in this volume explore the way in which these parties both contend and work with Pakistan's military-bureaucratic establishment to assert and expand their power.

Researchers use interviews, surveys, data, and ethnography to illuminate the internal dynamics and motivations of these groups and the mechanisms through which they create policy and influence state and society. Pakistan's Political Parties is a one-of-a-kind resource for diplomats, policymakers, journalists, and scholars searching for a comprehensive overview of Pakistan's party system and its unlikely survival against an interventionist military, with insights that extend far beyond the region.