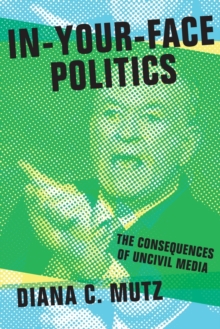 Americans are disgusted with watching politicians screaming and yelling at one another on television.

But does all the noise really make a difference? Drawing on numerous studies, Diana Mutz provides the first comprehensive look at the consequences of in-your-face politics.

Her book contradicts the conventional wisdom by documenting both the benefits and the drawbacks of in-your-face media. "In-your-face" politics refers to both the level of incivility and the up-close and personal way that we experience political conflict on television.

Just as actual physical closeness intensifies people's emotional reactions to others, the appearance of closeness on a video screen has similar effects.

We tend to keep our distance from those with whom we disagree.

Modern media, however, puts those we dislike in our faces in a way that intensifies our negative reactions.

Mutz finds that incivility is particularly detrimental to facilitating respect for oppositional political viewpoints and to citizens' levels of trust in politicians and the political process. On the positive side, incivility and close-up camera perspectives contribute to making politics more physiologically arousing and entertaining to viewers.

This encourages more attention to political programs, stimulates recall of the content, and encourages people to relay content to others.

In the end, In-Your-Face Politics demonstrates why political incivility is not easily dismissed as a disservice to democracy--it may even be a necessity in an age with so much competition for citizens' attention.