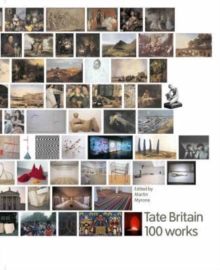 The 100 artworks illustrated in this guide cover 500 turbulent years of British history, during which the peoples of the British Isles joined together in an uneasy union, created the largest Empire ever known and emerged as the first great capitalist economy on earth.

From Hogarth to Turner, from Stanley Spencer to Bridget Riley and Lucien Freud, the vitality and quality of British art across the centuries shines out from the works of the nation's most famous artists.

The landscape paintings of Gainsborough and Constable, the meticulous creations of the Pre-Raphaelites and the penetrating figure studies of Bacon and Hockney provide some of the most familiar images in Western art.

Among contemporary artists, Gillian Wearing and Jeremy Deller, Chris Ofili and Damien Hirst deploy a dizzying array of media to produce works laced with a typically British black humour and ability to shock.

With a penetrating introduction by Tate Britain curator Martin Myrone, and informative entries for each work, this is a concise and accessible introduction to British art.