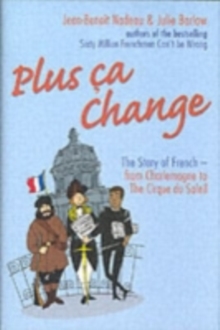 The story of French

"Plus Ca Change", like any good story, tells of spectacular failures and unexpected success.

This is the story of the French language - second only to English for the number of countries where it is officially spoken - a language that is the official tongue of two G-7 countries and three European nations.

It is a language with rules so complex that only a few people ever completely master it.

Nadeau and Barlow show the readers - through their own experiences of living and travelling to French-speaking countries - how the French language developed and changed over the centuries, how it came to be spoken in the Americas, Africa and Asia and how it gained and maintained its global appeal - unravelling the mystique of a language that has been mysterious for too long.

It is written in a chronological narrative spanning more than 10 centuries, from ancient French dialects of the 8th century to the present-day French spoken in Quebec, Algeria, Beirut and more.

While the story of the French language may have began over a thousand years ago, it is far from over...