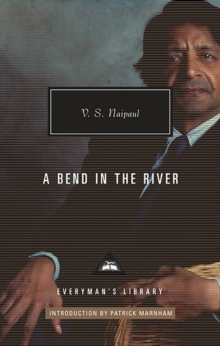 A bend in the river

Post-colonial Africa is dissected with pitiless lucidity in this disturbing novel about an outsider, the young Indian trader, Salim, who has moved from the coastal settlement where he grew up to an unnamed country in the African interior (largely based on the Democratic Republic of Congo), settling on that very bend in the river where Conrad had set his Heart of Darkness some seventy years before.

Salim enters a ghost town, once a flourishing European outpost, which is fast returning to the bush.

A new dictator 'the Big Man' is about to impose his regime with the assistance of Raymond, 'The Big Man's White Man', whose humanitarian concerns have won him international acclaim, but whose plans for the country's future are arrogant and delusional.

Salim becomes obsessed by Raymond's wife, Yvette, and begins and affair with her.

Personal and political tragedy follow, civil war returns, and Salim, contemplating the disastrous course of his life since leaving home, speaks for the powerlessness of ordinary people everywhere in the face of historical upheaval: 'I couldn't protect anyone [and] no one could protect me... we could only in various ways hide from the truth...