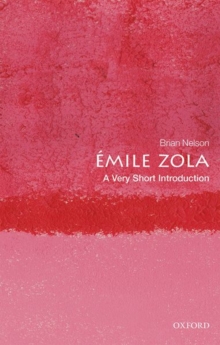 Emile Zola was the leader of the literary movement known as 'naturalism' and is one of the great figures of the novel.

In his monumental Les Rougon-Macquart (1871-93), he explored the social and cultural landscape of the late nineteenth century in ways that scandalized bourgeois society.

Zola opened the novel up to a new realm of subjects, including the realities of working-class life, class relations, and questions of gender and sexuality, and hiswriting embodied a new freedom of expression, with his bold, outspoken voice often inviting controversy. In this Very Short Introduction, Brian Nelson examines Zola's major themes and narrative art.

He illuminates the social and political contexts of Zola's work, and provides readings of five individual novels (The Belly of Paris, L'Assommoir, The Ladies' Paradise, Germinal, and Earth).

Zola's naturalist theories, which attempted to align literature with science, helped to generate the stereotypical notion that his fiction was somehow nonfictional.

Nelson, however,reveals how the most distinctive elements of Zola's writing go far beyond his theoretical naturalism, giving his novels their unique force.

Throughout, he sets Zola's work in context, considering his relations with contemporary painters, his role in the Dreyfus Affair, and his eventual murder. ABOUT THE SERIES: The Very Short Introductions series from Oxford University Press contains hundreds of titles in almost every subject area.