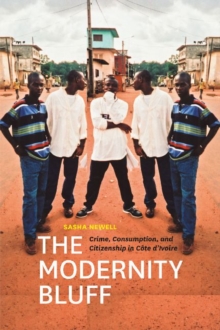 The modernity bluff : crime, consumption, and citizenship in Cãote d'Ivoire

In Cote d'Ivoire, appearing modern is so important for success that many young men deplete their already meager resources to project an illusion of wealth in a fantastic display of Western imitation, spending far more than they can afford on brand name clothing, accessories, technology, and a robust nightlife.

Such imitation, however, is not primarily meant to deceive - rather, as Sasha Newell argues in "The Modernity Bluff", it is an explicit performance so valued in Cote d'Ivoire it has become a matter of national pride.

Called bluffeurs, these young urban men operate in a system of cultural economy where reputation is essential for financial success.

That reputation is measured by familiarity with and access to the fashionable and expensive, which leads to a paradoxical state of affairs in which the wasting of wealth is essential to its accumulation.

Using the consumption of Western goods to express their cultural mastery over Western taste, Newell argues, bluffeurs engage a global hierarchy that is profoundly modern, one that values performance over authenticity - highlighting the counterfeit nature of modernity itself.