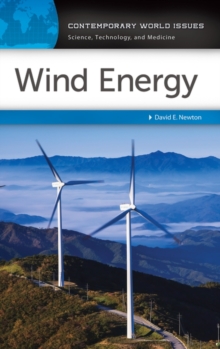 While covering the fascinating history of wind power as a whole, this timely handbook focuses on current technological developments and the promise-and pitfalls-of wind energy as part of the world's energy future. The use of wind power for the generation of electricity holds vast potential for solving the world's energy problems, but numerous technical and social issues must be addressed before that potential can be realized.

This handbook will both educate students about current issues related to wind energy and introduce the ways in which mankind has harnessed the wind through the ages.

Conventional wind turbine mechanics are explained, as are the technical improvements that drive modern wind turbines and other wind systems.

What makes the handbook unique is that it combines hard science with perspective pieces that address topics such as potential environmental damage that can result from modern wind technology, and how recent developments in wind turbine technology hold the promise for considerably reducing the cost of this alternate energy source, making it competitive with conventional fossil fuels.

Readers will be engaged by extensive discussion of the economic, political, and ethical issues raised by the expanding use of wind energy in the United States and elsewhere, and they will be intrigued by a look at what wind power can mean to the planet's energy future. Serves as a comprehensive introduction to the topic and a guide for further studyFeatures expert essays on issues and controversies related to the use of wind energyCovers the dangers wind power poses to wildlife as well as its impacts on communities' economic developmentProfiles key individuals and organizations in the fieldIncludes statistical information on the production and consumption of wind energy in the United States and around the world