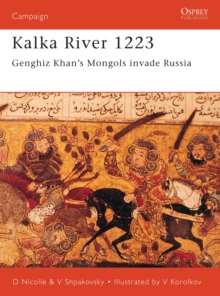 This book tells the fascinating story of the battle of the Kalka River, the culmination of Ghengis Khan's reconnaissance expedition into Russia of 1221.

The consequences for the history of Europe were incalculable.

The decisive Mongol victory over a combined Russian and Kipchaq army at the battle of the Kalka River opened up vast regions of Russia and Christian Eastern Europe to Mongol conquest.

On orders from Ghengis himself the victorious Mongols returned eastwards, delaying the final cataclysm by a few years.

However, the Russians were incapable of strengthening their defences enough to withstand the later attacks.

As a result Russia fell under what historians call 'the Mongol yoke' for several centuries.

In 1227 Ghengis died but the victory at the Kalka River was followed within 14 years by a Mongol invasion of Eastern Europe and even more disastrous defeats.

Only the death of the Ogatai, son and successor of Ghengis, saved Europe from Mongol domination.