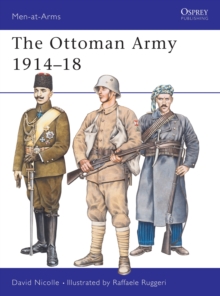 By: Nicolle, David,  Ruggeri, Raffaele(Illustrated by)

Part of the Men-at-arms series

The Ottoman Turkish Empire was one of the leading protagonists of World War I, and the stolid courage of the individual Ottoman soldier was recognised by all.

Yet the army in which he served is, like the Ottoman empire itself, generally little understood.

Over the four years of the Great War, the Ottoman Army, Navy and two tiny air services fought on five major fronts, as well as seeing troops serve in many other war zones.

This title takes a close look at the organisation, uniforms and equipment of the Ottoman Army during this period, and dispels the numerous myths that have surrounded the examinations of its forces at this time.