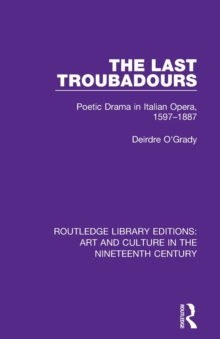 Part of the Routledge Library Editions: Art and Culture in the Nineteenth Century series

First published in 1991. At once poet, dramatist, adaptor and translator, the operatic librettist in turn expresses and mocks social convention.

The Last Troubadours traces the history of the Italian libretto from its courtly origin in the 16th century, through the crisis of the aristocracy and the 19th-century struggle for national unity, to the birth of social realism.

Also discussed are famous lyrical and musical collaborations - of Da Ponte and Mozart, Solera and Verdi, Romani and Bellini, and Boito and Verdi.