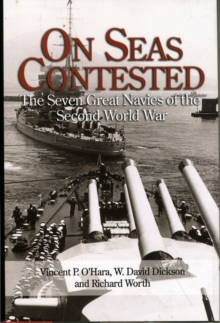 On seas contested : the seven great navies of the Second World War

A team of naval historians have pooled their expertise for this definitive single-volume reference on how the major navies of World War II were organised and how they trained, operated, and fought.

They provide a point-by-point evaluation on the inner workings of the navies of the United States, the United Kingdom, the British Commonwealth, Japan, Germany, Italy, France, and the Soviet Union.

Each Navy has its own chapter with such key features as weaponry, training, logistics, and doctrine.

In bringing together data buried in specialised works in various languages, the authors deliver a fresh, multinational view of the naval war. About the AuthorsVincent P. O'Hara is the author of three other books published by Naval Institute Press.

He lives in Chula Vista, CA. W. David Dickson, an expert on Japanese naval doctrine and carrier design, is an author who lives in Hernando, MS. Richard Worth specialises in warship design. A resident of Bolivar, MO, he is the author of several books.