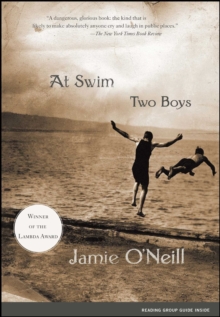 Set in Dublin, At Swim, Two Boys follows the year to Easter 1916, the time of Ireland's brave but fractured uprising against British rule.

O'Neill tells the story of the love of two boys: Jim, a naive and reticent scholar and the younger son of the foolish aspiring shopkeeper Mr. Mack, and Doyler, the dark, rough-diamond son of Mr. Mack's old army pal. Doyler might once have made a scholar like Jim, might once have had prospects like Jim, but his folks sent him to work, and now, schoolboy no more, he hauls the parish midden cart, with socialism and revolution and willful blasphemy stuffed under his cap. And yet the future is rosy, Jim's father is sure. His elder son is away fighting the Hun for God and the British Army, and he has such plans for Jim and their corner shop empire.

But Mr. Mack cannot see that the landscape is changing, nor does he realize the depth of Jim's burgeoning friendship with Doyler.

Out at the Forty Foot, that great jut of rock where gentlemen bathe in the scandalous nude, the two boys meet day after day.

There they make a pact: Doyler will teach Jim to swim, and in a year, Easter 1916, they will swim the bay to the distant beacon of Muglins Rock and claim that island for themselves.

Ten years in the writing, At Swim, Two Boys has already caused a sensation in England and Ireland, earning lavish praise for its masterful portrayal of class, tradition, and the conflict that has haunted Ireland for centuries.

At its heart, At Swim, Two Boys is a tender and tragic love story that will resonate with all readers.

But it is also a compelling and important work, a novel about people caught up in the tide of history -- set in a place and culture both unfamiliar and unforgettable.