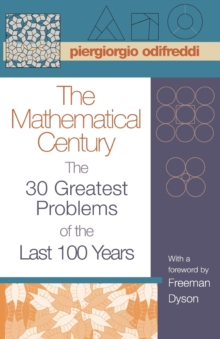 The mathematical century : the 30 greatest problems of the last 100 years

Princeton University Press
0691128057 / 9780691128054
Paperback
510.9'04
22/10/2006
Stock expected by 18/04/2021
United States
22 cm 224 p. : ill.
research & professional  Learn More academic/professional/technical
Reprint. This translation originally published: 2004.
The Mathematical Century is both popular and scholarly. Piergiorgio Odifreddi clearly and accurately covers many important mathematical problems and the contributions that leading mathematicians have made to their solutions. Offering a personal but very balanced perspective, his book is one that amateur and professional alike can learn from. -- Sir Michael Atiyah, Fields Medalist 1966, and former President of the Royal Society Piergiorgio Odifreddi has done a superb job, telling the story of twentieth-century mathematics in one short and readable volume. -- Freeman Dyson, Institute for Advance

The twentieth century was a time of unprecedented development in mathematics, as well as in all sciences: more theorems were proved and results found in a hundred years than in all of previous history.

In "The Mathematical Century", Piergiorgio Odifreddi distills this unwieldy mass of knowledge into a fascinating and authoritative overview of the subject.

He concentrates on thirty highlights of pure and applied mathematics.

Each tells the story of an exciting problem, from its historical origins to its modern solution, in lively prose free of technical details.

Odifreddi opens by discussing the four main philosophical foundations of mathematics of the nineteenth century and ends by describing the four most important open mathematical problems of the twenty-first century.

In presenting the thirty problems at the heart of the book, he devotes equal attention to pure and applied mathematics, with applications ranging from physics and computer science to biology and economics.Special attention is dedicated to the famous "23 problems" outlined by David Hilbert in his address to the International Congress of Mathematicians in 1900 as a research program for the new century, and to the work of the winners of the Fields Medal, the equivalent of a Nobel prize in mathematics.

This eminently readable book will be treasured not only by students and their teachers but also by all those who seek to make sense of the elusive macrocosm of twentieth-century mathematics.