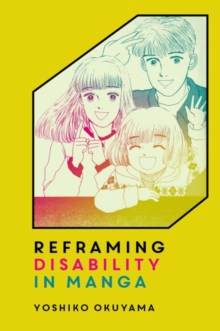 Reframing Disability in Manga analyzes popular Japanese manga published from the 1990s to the present that portray the everyday lives of adults and children with disabilities in an ableist society.

It focuses on five representative conditions currently classified as shogai (disabilities) in Japan - deafness, blindness, paraplegia, autism, and gender identity disorder - and explores the complexities and sociocultural issues surrounding each.

Author Yoshiko Okuyama begins by looking at preindustrial understandings of difference in Japanese myths and legends before moving on to an overview of contemporary representations of disability in popular culture, uncovering sociohistorical attitudes toward the physically, neurologically, or intellectually marked Other.

She critiques how characters with disabilities have been represented in mass media, which has reinforced ableism in society and negatively influenced our understanding of human diversity in the past.

Okuyama then presents fifteen case studies, each centered on a manga or manga series, that showcase how careful depictions of such characters as differently abled, rather than disabled or impaired, can influence cultural constructions of shogai and promote social change.

Informed by numerous interviews with manga authors and disability activists, Okuyama reveals positive messages of diversity embedded in manga and argues that greater awareness of disability in Japan in the last two decades is due in part to the popularity of these works, the accessibility of the medium, and the authentic stories they tell.

Scholars and students in disability studies will find this book an invaluable resource as well as those with interests in Japanese cultural and media studies in general and manga and queer narrative and anti-normative discourse in Japan in particular.