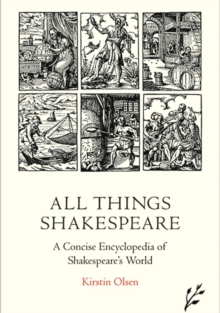 All things Shakespeare : a concise encyclopedia of Shakespeare's world

Part of the All Things series

What are Iago's duties as Othello's Ensign, and why is he so dissatisfied with the appointment?

Falstaff loves to drink sack - but what is sack? When Kent calls Oswald a 'whoreson, glass-gazing, super-serviceable, finical rogue', what is he getting at?

Shakespeare's plays contain some of the great death scenes in literature - but what was the Jacobean attitude to death, what were the last rites, who washed and dressed the corpse, and what happened at the funeral?Shakespeare's original audience would have needed no help with references to their everyday lives.

For play-goers four hundred years later "All Things Shakespeare" is an invaluable compendium of fascinating explanations on topics as varied as astrology, hunting, children's games, money, beer-brewing, servants, alehouses, the army and the law, each linked to specific allusions in the works.

Fact-filled and user-friendly, the guide can be used before or after seeing a play, or for armchair browsing, to increase your understanding and enhance your enjoyment of our greatest dramatist.