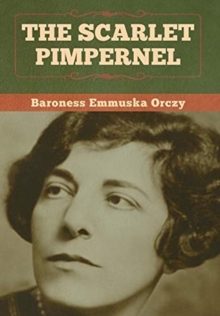 Baroness Emma Magdolna Rozália Mária Jozefa Borbála "Emmuska" Orczy de Orci (23 September 1865 – 12 November 1947) was a Hungarian-born British novelist and playwright. She is best known for her series of novels featuring the Scarlet Pimpernel, the alter ego of Sir Percy Blakeney, a wealthy English fop who turns into a quick-thinking escape artist in order to save ill-fated French royalty from "Madame Guillotine" during the French revolution.

Introducing the notion of a "hero with a secret identity" into popular culture, the Scarlet Pimpernel exhibits characteristics that would become standard superhero conventions, including the penchant for disguise, use of a signature weapon (sword), ability to out-think and outwit his adversaries, and a calling card (he leaves behind a scarlet pimpernel at each of his interventions). By drawing attention to his alter ego Blakeney he hides behind his public face as a slow thinking foppish playboy (like Bruce Wayne), and he also establishes a network of supporters, The League of the Scarlet Pimpernel, that aid his endeavours.

Orczy went on to write over a dozen sequels featuring Sir Percy Blakeney, his family, and the other members of the League of the Scarlet Pimpernel, of which the first, I Will Repay (1906), was the most popular. The last Pimpernel book, Mam'zelle Guillotine, was published in 1940. None of her three subsequent plays matched the success of The Scarlet Pimpernel. She also wrote popular mystery fiction and many adventure romances. Her Lady Molly of Scotland Yard was an early example of a female detective as the main character. Other popular detective stories featured The Old Man in the Corner, a sleuth who chiefly used logic to solve crimes.

Orczy held strong political views. Orczy was a firm believer in the superiority of the aristocracy, as well as being a supporter of British imperialism and militarism. During the First World War, Orczy formed the Women of England's Active Service League, an unofficial organisation aimed at encouraging women to persuade men to volunteer for active service in the armed forces. Her aim was to enlist 100,000 women who would pledge "to persuade every man I know to offer his service to his country". Some 20,000 women joined her organisation. Orczy was also strongly opposed to the Soviet Union.

She died in Henley-on-Thames, Oxfordshire on 12 November 1947. (wikipedia.org)