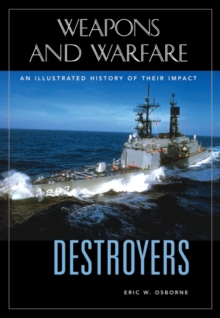 Destroyers : an illustrated history of their impact

Part of the Weapons and Warfare series

On July 4, 1991, the Arleigh Burke class of destroyers, the most powerful surface combatants in naval history, was commissioned.

It was the culmination of a century-and-a-half evolution of the destroyer-an evolution captured in this vivid and timely history of the world's most popular warship.

The mid-1800s saw a dramatic change in naval warfare, first with the torpedo, then with "torpedo destroyers"-ships designed to protect other vessels from this new threat. since then, destroyers have become the staunch "bodyguards" of the world's navies, their capabilities continually enhanced to counter an increasing number of air-, land-, and sea-based threats.

Destroyers: An Illustrated History of Their Impact tells the story of one of the most recent, rapidly evolving additions to the world's navies.

Coverage ranges from the 1882 launch of the first destroyer, through the nonstop technical and strategic innovations of the world war eras, to the current high watermarks of destroyer design such as the Arleigh Burke class (named for the navy's most famous destroyer squadron combat commander). With its ship-by-ship analysis, this masterful volume shows how destroyers have continually met the challenge of protecting naval and land operations from ever more dangerous attacks.

The book also captures the flavor of shipboard life for officers and crew, and looks at the crucial role of the destroyer as a standard-bearing status symbol of naval might and political intention.