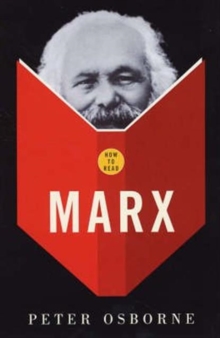 How to read Marx

Part of the How to Read series

Emphasizing the Romantic heritage and modernist legacy of Karl Marx's writings, Peter Osborne presents Marx's thought as a developing investigation into what it means, concretely, for humans to be practical historical beings.

Drawing upon passages from a wide range of Marx's writings, and showing the links between them, Osborne refutes the myth of Marx as a reductively economistic thinker.

What Marx meant by 'materialism', 'communism' and the 'critique of political economy' was much richer and more original, philosophically, than is generally recognized.

With the renewed globalization of capitalism since 1989, Osborne argues, Marx's analyses of the consequences of commodification are more relevant today than ever before.

Extracts are taken from the full breadth of Marx's writings, from his student Notebooks on Epicurean Philosophy, via the Economic and Philosophical Manuscripts and The Communist Manifesto to Capital.