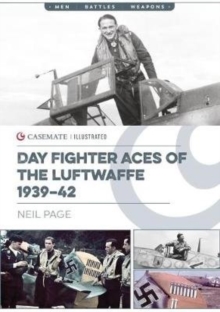 Part of the Casemate Illustrated series

Military and aviation history enthusiasts have always been interested in the fighter pilots of Hitler's Luftwaffe.

Some of their stories are extraordinary. Fighting from the Arctic Circle to the North African deserts, from the Caucasus in the East to Normandy in the West, the German fighter pilot flew and fought until he was shot down, "flown out," wounded or killed in action.

A handful survived from "first to last." This first volume of Day Fighter Aces of the Luftwaffe traces the story of the Luftwaffe's day fighter arm (der Tagjagd) from its inception to 1942. Organized campaign by campaign, this chronological account interweaves brief biographical details, newly translated personal accounts and key moments in the careers of a host of notable and lesser known Luftwaffe aces.