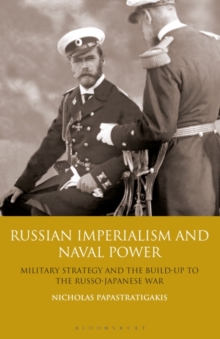 Russian imperialism and naval power : military strategy and the build-up to the Russian-Japanese war

From 1904-1905, Russia and Japan were locked in conflict arising from rival imperial ambitions in the Far East.

Nicholas Papastratigakis offers an integrated analysis of Russian naval strategy in the decade before this Russo-Japanese War, in which the Russians suffered catastrophic defeat.

He seeks to determine the extent to which their defeat can be attributed to flawed Tsarist naval strategy in the region.

Rooted in rich primary resources from Russian, French and British archives, the book sheds new light on Russia's conduct in international affairs in the pre-World War I era.

He places Russian naval strategy in the broader context of Russian military strategy at the turn of the century, and of imperialism and 'navalism' in general.

This book will be of enormous interest to scholars and students of naval, military, imperial and Russian history.