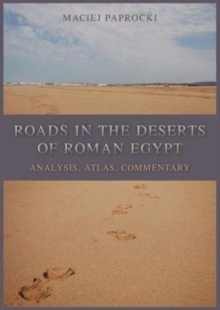 Roads in the deserts of Roman Egypt

Egypt under the Romans (30 BCE-3rd century CE) was a period when local deserts experienced an unprecedented flurry of activity.

In the Eastern Desert, a marked increase in desert traffic came from imperial prospecting/quarrying activities and caravans transporting wares to and from the Red Sea ports.

Desert road archaeology has used satellite imaging, landscape studies and network analysis to plot desert trail networks with greater accuracy; however, it is often difficult to date roadside installations and thus assess how these networks evolved in scope and density in reaction to climatic, social and technological change. Roads in the Deserts of Roman Egypt examines evidence for desert roads in Roman Egypt and assesses Roman influence on the road density in two select desert areas: the central and southern section of the Eastern Desert and the central Marmarican Plateau and discusses geographical and social factors influencing road use in the period, demonstrating that Roman overseers of these lands adapted remarkably well to local desert conditions, improving roads and developing the trail network.

The 'route of least resistance' across the desert varied from period to period according to the available road infrastructure and beasts of burden employed.

Roman administration in Egypt not only increased the density of local desert 'node' networks, but also facilitated internodal connections with camel caravans and transformed the Sahara by establishing new, or embellishing existing, nodes, effectively funnelling desert traffic into discernible corridors.Significantly, not all desert areas of Egypt are equally suited for anthropogenic development, but almost all have been optimised in one way or another, with road installations built for added comfort and safety of travellers.

Accordingly, the study of how Romans successfully adapted to desert travel is of wider significance to the study of deserts and ongoing expansion due to global warming.