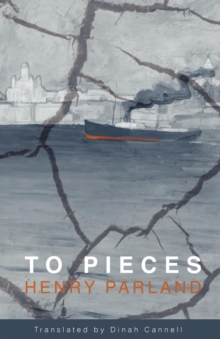 To Pieces is Henry Parland's (1908-1930) only novel, published posthumously after his death from scarlet fever.

Ostensibly the story of an unhappy love affair, the book is an evocative reflection upon the Jazz Age as experienced in the Baltic.

Parland was profoundly influenced by Proust's A la recherche du temps perdu, and reveals his narrative through fragments of memory, drawing on his fascination with photography, cinema, jazz, fashion and advertisements.

Parland was the product of a cosmopolitan age: his German-speaking Russian parents left St Petersburg to escape political turmoil, only to become caught up in Finland's own civil war - Parland first learned Swedish at the age of fourteen.

To remove Parland from a bohemian and financially ruinous life in Helsinki, his parents sent him to Kaunas in Lithuania, where he absorbed the theories of the Russian Formalists.

To Pieces became the focus of renewed interest following the publication of a definitive critical edition in 2005, and has since been published to great acclaim in German, French and Russian translation.