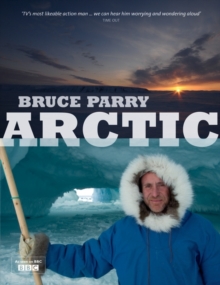 Explorer Bruce Parry takes an epic Arctic journey, following the six-month Polar summer through Greenland, Canada, Alaska, Russia and Scandinavia to document a vital part of our world at a point of extraordinary change.

In this companion to a landmark series, Bruce tells the stories of traditional Arctic inhabitants along with the oilworkers, miners and scientists who have been attracted to this dramatic yet hostile landscape in search of the wealth of natural resources and ecological data it can provide.

He highlights the friction between old and new ways as traditional lifestyles are threatened by many factors:climate change, new legislation and the intrusion of big business.

Within engaging, intimate text and specially commissioned photography along with stills from the series, this book provides a human focus in an environmental context.

Immersing himself in the cultures of peoples like the Chukchi, the Sami, the hunters of Qaanaaq and the Gwitchin tribes of the Canadian north, Bruce stresses their connection to the lands and hunting grounds that sustain them while exposing the issues they face.

Rich in content and narrative, Arctic Circle with Bruce Parry brings human stories and global issues to the fore, pinpointing cultures on the brink of irreversible change.