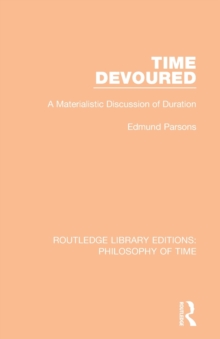 Part of the Routledge Library Editions: Philosophy of Time series

Originally published in 1964. This lively, challenging book, written with enthusiasm, conviction and clarity, sets out to elucidate the shadowy concept of Time.

This involves central philosophical issues, which are vigorously discussed.

Also relativity theory, in a clear-cut exposition, is made intelligible in a new light.

All who are interested in science and its philosophical implications will find this book highly controversial but certainly readable. The author believes philosophy to be important, not only for its professionals, but for everyman.

He believes that the fact that this is no longer realised shows that something is wrong with professional philosophy; he also indicates what this is.

The book ends, surprisingly but pertinently, with a bold plunge into the questions of telepathy, precognition and psychical research generally.

Whilst the phenomena are reasonably admitted, trenchant criticism of their significance confronts parapsychologists.