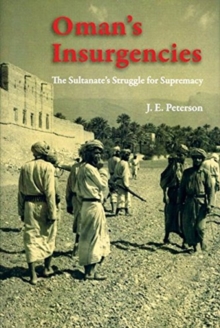 Oman at war : the sultanate's struggle for supremacy

Oman today is a rapidly modernizing and peaceful country on the fringes of a region in turmoil.

It does, however, have a long history of internal strife.

In the twentieth century, this strife took the form of two internal conflicts.

The Northern Oman or al-Jabal al-Akhdar War of the 1950s was a struggle between the forces of the old tribally based Imamate and the newer Sultanate in the northern part of the country.

In the Dhufar War of the 1960s-70s an anti-Sultanate - and later Marxist - front sought secession in the south.

J. E. Peterson takes a detailed look at these two wars in the context of insurgency and counter-insurgency warfare.

He surveys Oman's transition from a strictly traditional regime controlling only parts of the country to a modern, inclusive state, particularly in terms of security concerns.

Peterson analyses the development of the Sultanate's successful responses to security challenges, especially in the creation and evolution of modern armed forces.