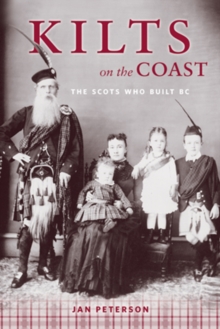 Kilts on the coast : the Scots who built BC

When the Hudson's Bay Company decided to establish its new Pacific coast headquarters at Fort Victoria on Vancouver Island in 1843, the Island was a pristine paradise - or an isolated wilderness, depending on one's point of view that had sustained its First Nations inhabitants for millennia.

It was one of the last places to be discovered and settled by Europeans in North America.

It was Scots who came to the Island to manage the Company's business in Fort Victoria, engaging in the fur trade and establishing coal-mining ventures around what is now Nanaimo, where "black diamonds" were found in abundance.

From founding father James Douglas and other high-placed Company men to the humble miners from Orkney and Ayrshire who were brought over on harsh voyages around Cape Horn to work Nanaimo's mines, the Scottish influence on the young Colony of Vancouver Island was indelible.

Nanaimo author and historian Jan Peterson focuses on events and people who sparked settlement and growth in BC's first Crown Colony over six critical years, 1848 to 1854, and delves deep into the roots of the Island's Scottish presence, tracing the lives of such pioneers as Dr. William Tolmie, Robert Dunsmuir and their descendants.