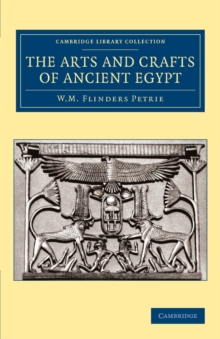 The Arts and Crafts of Ancient Egypt

In this 1909 handbook, ranging in coverage from the prehistoric period to the Roman era, he examines a sample of the work of Egyptian painters, sculptors and diverse craftsmen, touching on such topics as statuary, architecture, jewellery, pottery and textiles.

Beginning with a discussion of the meteorological, religious and political factors that influenced Egyptian artistic responses, the book contains 140 illustrations of the most striking works of each period.

Many of the featured artefacts formed part of Petrie's own collection, and over a third of the photographs had not been previously published.

His earlier lectures on Egyptian Decorative Art (1895), along with many of his other publications, are also reissued in this series.