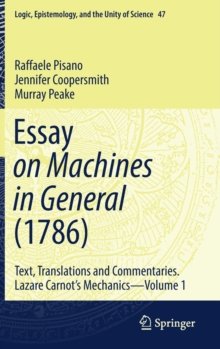 Part of the Logic, Epistemology, and the Unity of Science series

This book offers insights relevant to modern history and epistemology of physics,mathematics and, indeed, to all the sciences and engineering disciplines emergingof 19th century.

Subsequently, his new coming science applied to machines attractedconsiderable interest for technician, as well, already in the 1780's.

With no lack inrigour, Carnot used geometric and trigonometric rather than algebraic arguments, andusually went on to explain in words what the formulae contained.

His main physical-mathematical concepts were the Geometric motion and Moment of activity-concept ofWork .

In particular, he found the invariants of the transmission of motion (by statingthe principle of the moment of the quantity of motion) and theorized the condition ofthe maximum efficiency of mechanical machines (i.e., principle of continuity in thetransmission of power). While the core theme remains the theories and historical studies of the text, the bookcontains an extensive Introduction and an accurate critical English Translation -including the parallel text edition and substantive critical/explicative notes - of Essaisur les machines en general (1786).

The authors offer much-needed insight into therelation between mechanics, mathematics and engineering from a conceptual, empiricaland methodological, and universalis point of view.

As a cutting-edge writing byleading authorities on the history of physics and mathematics, and epistemologicalaspects, it appeals to historians, epistemologist-philosophers and scientists (physicists, mathematicians and applied sciences and technology).