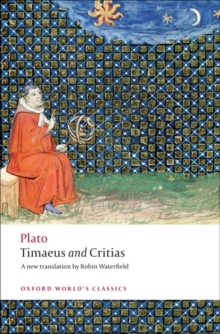 'The god wanted everything to be good, marred by as little imperfection as possible.'Timaeus, one of Plato's acknowledged masterpieces, is an attempt to construct the universe and explain its contents by means of as few axioms as possible. The result is a brilliant, bizarre, and surreal cosmos - the product of the rational thinking of a creator god and his astral assistants, and of purely mechanistic causes based on the behaviour of the four elements. At times dazzlingly clear, at times intriguingly opaque, this was state-of-the-art science in the middle of thefourth century BC. The world is presented as a battlefield of forces that are unified only by the will of God, who had to do the best he could with recalcitrant building materials. The unfinished companion piece, Critias, is the foundational text for the story of Atlantis. It tells how a model society became corrupt, and how a lost race of Athenians defeated the aggression of the invading Atlanteans.

This new edition combines the clearest translation yet of these crucial ancient texts with an illuminating introduction and diagrams.