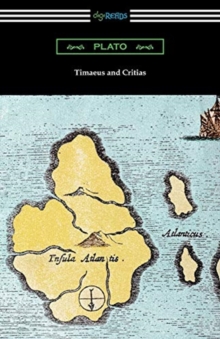 By: Plato,  Jowett, Benjamin(Translated by)

Two late dialogues of Plato designed to be part of a trilogy that the philosopher did not finish, “Timaeus” and “Critias” utilize a few select men to theorize on the natural world and to tell a story of the lost city of Atlantis. “Timaeus” is a treatise, written in Socratic dialogue form in 360 BC, that speculates on the nature of the physical world, the purpose of the universe, properties of the universe, the creation of the world, the soul, the elements, and the golden ratio. It is followed by the dialogue “Critias”, which tells the tale of the powerful island kingdom of Atlantis. Though the people are the offspring of a god, their human nature begins to corrupt them. They attempt to conquer Athens but fail because of the Athenians’ well-ordered society. Just as Zeus begins to decree their punishment, however, the incomplete work comes to an end. Though not extant, this pair of dialogues is clearly the writing of a brilliant mind posing and considering creative ideas. This edition is printed on premium acid-free paper and follows the translations with introductions of Benjamin Jowett.